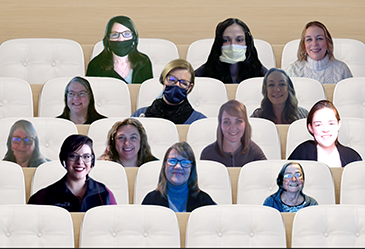 For most people, New Year’s Eve is a time for celebration and remembrance, for noisemakers and midnight kisses, for swaying together and singing “Auld Lang Syne.”

The caregivers on the Cash Management crew in St. Charles’ Single Billing Office, however, are not “most people.”

Cash Management is a team of 12 caregivers who are responsible for, among other things, taking payments made to the health system – from insurance companies, outpatient clinics, gift shops, cafeterias and so on – and posting those payments to the appropriate accounts.

“All monies that come into St. Charles, we are the hub for that,” said Terri McCreary, the team’s supervisor. “We work with Finance to get that money in the system and posted to a patient account or to the general ledger – wherever it needs to go.”

Thanks to the general cadence of accounting work, the end of each month is a rush for the team as it works to get as many payments posted as possible. That rush is heightened on Dec. 31, when reducing the health system’s accounts receivable by end-of-year is a top priority, McCreary said.

“I watch the numbers closely throughout the day,” she said. “We want to see how low we can go with what is unposted.”

The job all but precludes partying on one of the world’s biggest party nights. In fact, McCreary brings up the possibility of working New Year’s Eve when she interviews prospective hires.

“I tell them, ‘You might have to work till midnight on New Year’s.’ That’s always a possibility,” she said. “And with the people on the team, we start talking about it Dec. 1: ‘Don’t forget you’re working!’”

The caregivers on McCreary’s team not only remember, they embrace the assignment.

“My family always watches (football) on New Year’s Eve, so I was prepping everybody that this year’s going to be a little different for me,” said Amber Buhmann, one of the newest members of the team. “But I was also really excited. (That day), we were all sending each other messages and getting each other pumped up about getting through the day. It made it fun.”

People who work in the field of finance get used to working hard at the end of months and quarter, said payment posting Specialist Lead Stephanie Sapp, but year-end is “super exciting” as the Cash Management team works hard to post every payment it possibly can.

“We want to make Terri proud,” said Christy Vermillion, echoing a sentiment voiced by several of her colleagues. “We have a goal and we want to make that goal. It’s important to us.”

It’s important to the health system, too, said Jan Haverly, who has worked for St. Charles for 25 years.