Appointments for 70+ are fully booked for Feb. 26

As of Feb. 23, all appointments for the 70+ population are now full. We will release more appointments when we have information about our vaccine allotment from the state for next week. Please check back, as this message will change. Learn more. 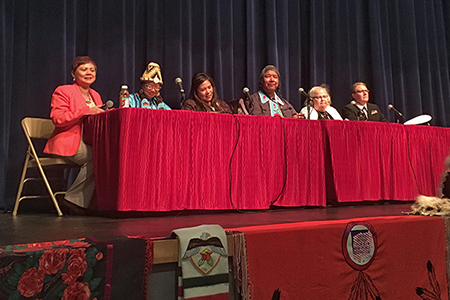 Culturally appropriate care for all at St. Charles Madras

There are a couple of new elements in the outdoor healing garden that sits at the center of St. Charles Madras. To the untrained eye, they may appear to simply be new decor, added to the space to give it more character.

But there’s more to the story.

Mounted on a stone at the south end of the garden is an artistic rendering of a face based on “She Who Watches,” a famous piece of Native American Indian (NAI) rock art located in the Columbia River Gorge. And on the garden’s north end, an existing water feature has been adorned with a sculpture of three salmon, which symbolizes abundance, fertility, prosperity and renewal in NAI culture.

The two pieces are the most visible evidence of a major effort underway at St. Charles Madras to make sure the hospital is providing care that is culturally appropriate for the diverse community it serves. That effort reaches not only the artwork throughout the hospital, but also into its training programs, care practices and policies, patient interactions and beyond.

The ultimate goal is for hospital staff and providers to mirror the demographics of Madras and Jefferson County, where the population is approximately a third NAI, a third Latino and a third white.

A hospital that looks like its community can take better care of its community, said Candy Canga-Picar chief nursing officer (CNO) in Madras, who has led the effort.

“Research has shown that in order for an organization to be culturally competent -- to minimize the gap in health care available to different ethnicities -- you want your workforce to be a reflection of the communities you serve,” she said. “If you walk around right now and look at our nursing workforce in Madras, I have one registered nurse who is Latino and one who is Native American Indian. The rest are all white. And the community is diverse. So there’s a huge disparity here.”

Canga-Picar has been the CNO at St. Charles Madras for about 5 years. She became interested in culturally competent care after hearing from caregivers who were concerned about running afoul of patients’ cultural preferences, as well as patients who felt their culture was being overlooked or disrespected -- not maliciously, necessarily, but because of ignorance and implicit bias.

“I’m Filipino, so there are things that I do and believe that may be difficult to understand no matter how much I try to explain it to you,” she said. “In health care, that translates into, ‘Your way of doing things that you think are right for the patient may be wrong for my culture.’ For example, the fast-paced environment of the hospital and how we usually interact with patients is uncomfortable and counter to the Native American Indian culture, which is much slower paced.’”

Canga-Picar started studying culturally competent care as part of her pursuit of a doctorate in nursing, and there are three major components to her work: how to grow cultural competency among current caregivers, how to empower and involve members of the community from diverse cultural backgrounds, and how to create an organization that, as a whole, understands cultural differences and how they affect care.

As you might guess, some of the more ambitious goals of Canga-Picar’s project will take a long time to come to fruition.

“We’re doing it slowly,” she said, “because you can’t boil the ocean.”

But you can start with things like installing NAI art in the healing garden, and replacing art elsewhere in the hospital that’s well-intentioned, but does not reflect the people of the three tribes in Jefferson County. And last year, Canga-Picar organized St. Charles’ first Transcultural Care Conference, featuring keynote speaker Dr. Josepha Campinha-Bacote.

The hospital followed up the conference with cultural competency training for its caregivers, as well as self-assessments before and after the training, Canga-Picar said. St. Charles’ nurse leadership team worked with human resources to rewrite nursing job descriptions to include required participation in cultural competency activities. And, in concert with Oregon Health & Science University, a clinical protocol has been established to flag Native American children who have a potentially deadly genetic condition known as CPT1.

“We put them in (our electronic medical record) and it creates an alert so that when this kid shows up, the physician knows exactly what to do,” Canga-Picar said.

Additionally, the hospital now has a Patient Family Advisory Council (PFAC) focused on NAI issues. Since August of 2018, the group has been working to identify gaps in care for tribal members, and changes are already happening: St. Charles has switched from a mailed patient satisfaction survey to a telephone survey at the PFAC’s suggestion.

“Participation has jumped from a small handful of people per month to upwards of 25 respondents per quarter,” Canga-Picar said.

“They’re an oral tradition people, so if it requires writing, they won’t fill it out. We were spending lots of money sending mailers and they were just getting thrown away,” she said. “And all we had to do was ask. They’re saying: ‘Involve us. We’re you’re patients.’”

That message is resonating with people at St. Charles Madras besides Canga-Picar. David Golda, St. Charles’ vice president and hospital administrator in Madras, said he’s “all in” on improving the organization’s cultural competency. He said it’s important that St. Charles work to create “better balance” among its caregivers, and that that journey begins with recognizing the cultural differences that exist within the hospital.

“That’s really one of the most important things about the work (Candy is) doing -- that purposeful effort to get all caregivers on the same page,” Golda said, “but also to involve the community in identifying and understanding what those differences look like.”

The people who work at the Madras hospital care deeply about their patients and have been happy to participate in cultural training, he said. “They want to do the best job they can for the people who come here,” Golda said. “So I think simply having access to this kind of information has been seen as a positive.”

There is still work to do, of course. Canga-Picar would like to require all caregivers visit the Warm Springs museum and the Indian Health Services clinic, and she wants cultural competency to be part of St. Charles’ standard onboarding program. Plans are being made to renovate the Madras Family Birthing Center with colors and artwork that reflect both Latino and NAI culture. And a Latino PFAC is set to launch in November.

Madras resident Mayra Benitez has expressed interest in serving on the Latino PFAC. She called Canga-Picar’s work “awesome” but said she still accompanies her mother to appointments because too much information gets lost in translation between caregivers and patients.

“Spanish-speaking patients still walk out of there feeling like they weren’t understood, or that their needs weren’t met. As a child of a migrant family that didn’t speak any English, I’ve seen that,” Benitez said. “Because of our culture, a Latino patient will go deep into the background of how they ended up at the hospital or the doctor’s office, and a lot of that still gets dismissed.”

She said she knows it’s going to take time for St. Charles Madras to reflect the community it serves, and that while staffers work on important improvements behind the scenes, she’s hopeful that members of the Latino community will soon be able to see themselves represented in more public-facing ways.

“You walk in and you don’t see a Hispanic face at the front, so there’s still a barrier there,” Benitez said. “There are a lot of good things happening that patients aren’t seeing. But we also need representation right when you walk in the door so people know that, ‘Yes, it’s going to take time, but we’re trying. We’re making these changes because we want you to feel welcome here.’”

People are taking notice of St. Charles Madras’ efforts outside Central Oregon, too. Recently, Canga-Picar received a call from Nicole Krishnaswami, executive director of the Oregon Medical Board, who invited her to present her work to the statewide regulatory agency sometime next year.

“The Oregon Medical Board is committed to promoting culturally competent care among the physicians, physician assistants and acupuncturists it licenses. I was intrigued to read about Ms. Canga-Picar’s work at St. Charles Madras in a recent news article,” Krishnaswami said. “Her dedication to the community is inspiring, and I am thrilled that she will present her important work to the Oregon Medical Board members and staff at an upcoming board meeting.”

Back in Madras, Canga-Picar recently thumbed through a well-worn three-ringed binder that contains page after page of findings on culturally sensitive care, as well as goals for the Madras hospital and St. Charles as a whole. Completed tasks are highlighted in green, “in progress” tasks are yellow, and items still to be tackled are white. There are plenty of each, but Canga-Picar knows not to get bogged down in day-to-day accomplishments.

“I told the managers, ‘Look guys, we have to give ourselves time to get from knowledge to translation to behaviors,’” she said. “Just because we have a cultural summit and a PFAC doesn’t mean we change overnight. This is an ongoing thing. Cultural competency is not a destination. It’s an ongoing journey.”