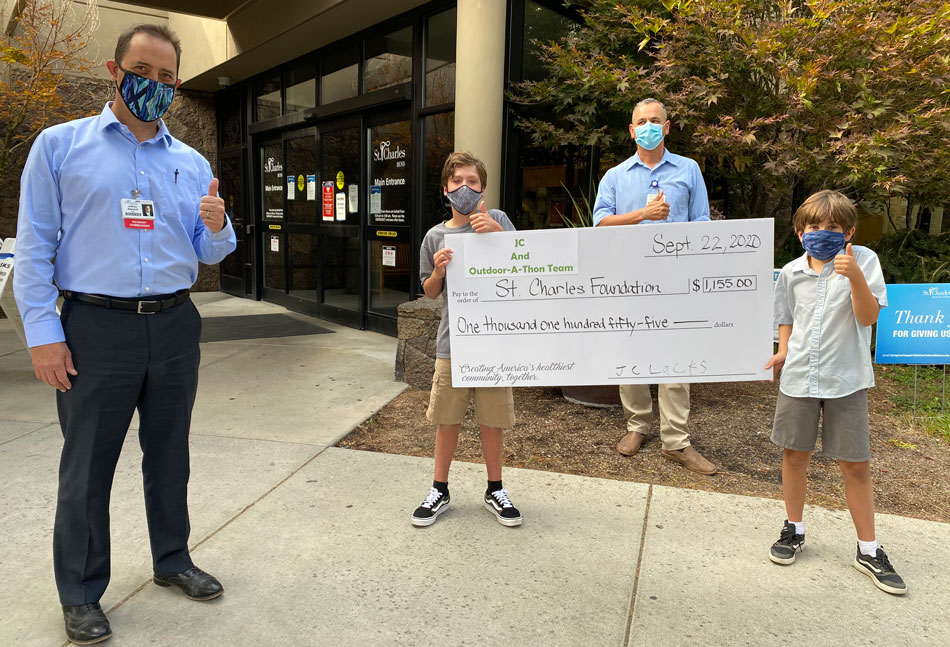 Early in the summer, 10-year-old JC Lacks of Bend looked at his mom, Lori, and dad, Jon, and told them he wanted to do something to help with the fight against COVID-19.

“This was not prompted at all,” said Lori, a school teacher. “I looked at him and said, ‘What do you mean?’”

Her son was already dreaming big.

“‘What about all the doctors? Maybe we can do something for them,’” JC remembers asking his parents. “‘Or maybe we could come up with a cure for COVID.’”

Lori can’t help but smile when she remembers the conversation.

“I told him, ‘Yes, that would be nice, but let’s keep thinking about this,’” she said.

With shortages of personal protective equipment making headlines earlier in the pandemic, the Lacks ultimately decided to try running a fundraiser, with a goal of donating money toward the purchase of gloves, masks and other gear for frontline caregivers. They called it the Outdoor-A-Thon St. Charles Frontline COVID Fundraiser.

“We wanted it to be purposeful for the kids, to get them outside and to encourage them to be active,” Lori Lacks said. “Rather than just asking people for money, we decided to have the kids do whatever they want outdoors -- hiking, biking walking -- and log the miles, and we asked people to make a donation in a lump sum or per mile.”

JC wrote a letter explaining the idea and sent it out to neighbors, friends and family. Lori created a Facebook group to organize the effort. Word of the fundraiser spread and JC’s buddies started joining in and clocking their miles and posting pictures of themselves on trails, atop bikes and even floating the river.

“It was great motivation to get us out and doing something as a family,” said Lori. “We’d be out somewhere and we’d say, ‘If we just go 10 more miles …’”

All told, a group of about 15 participants tallied more than 350 miles, with JC logging 135 on his own. They ended the fundraiser on Aug. 31, but money kept coming in until the total amount raised reached $1,155.

Earlier this week, JC and his friend Parker Sheppard, 10, got to present a check for that amount to Dr. Jeff Absalon, St. Charles’ chief physician executive, and Carlos Salcedo with the St. Charles Foundation.

“Do you know what you guys have in common with everyone who works here at St. Charles?” Absalon asked the boys. “They care about helping people, and you guys do, too. That’s a great quality to have.”

After making the donation, JC and Parker were beaming.

“This makes me so happy that we were able to raise all this money,” JC said. “And we had a lot of fun doing it.”