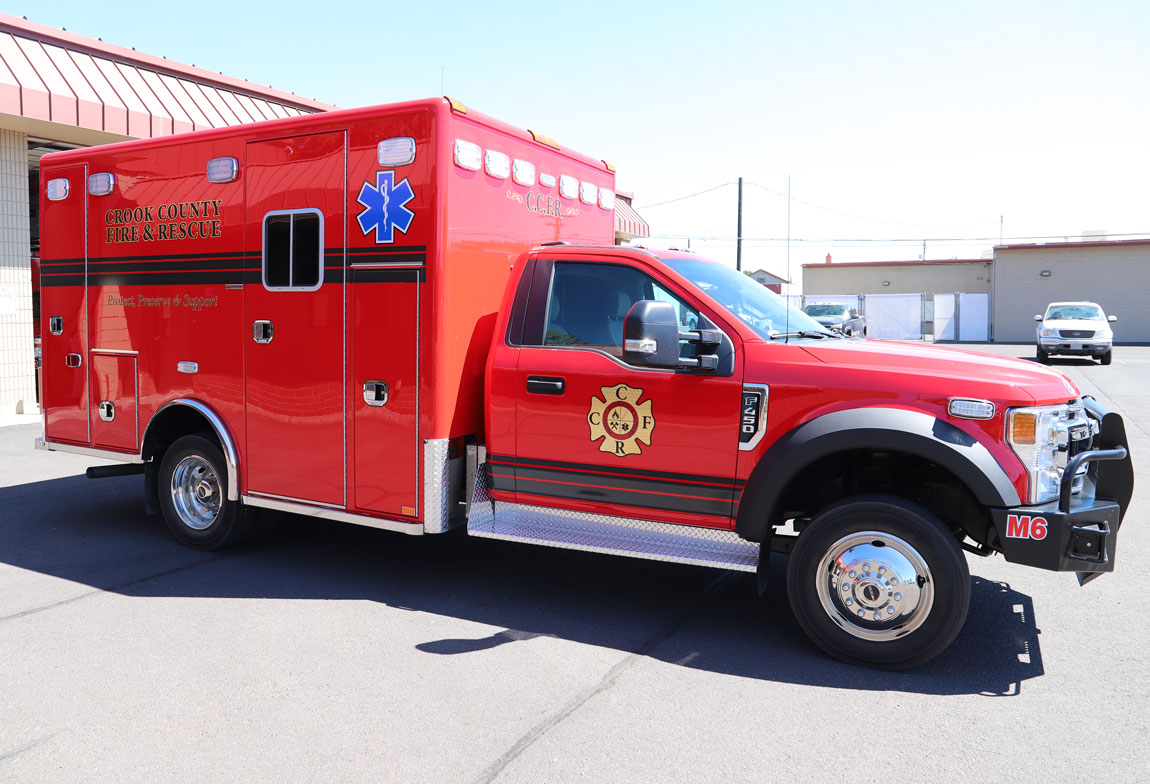 One big team working together for Crook County

“Oftentimes, they’ll bring in a patient with CPR in progress, and that crew will stay with us and help do compressions, or they’ll make sure we get the patient moved to where they need to go. I think that speaks to the teamwork we have with them,” said Levesque, trauma coordinator for the Prineville ED and house supervisor at St. Charles Prineville.

“We’re all from different organizations, but when we’re around a patient, it’s absolutely one big team,” she continued. “It’s so important for our patients and our community to know that we’re all working together to give them the best care possible.”

“Back then, the hospital was just a three-story house converted to a hospital and the ambulance crew had to actually carry gurneys up and down the stairs,” Lent said. “Even then, they worked closely with the hospital to make sure everything went as smoothly as possible.”

Since then, just about everything has changed except the strong partnership between the entities. The latest proof of that is St. Charles’ recent donation of $100,000 to Crook County Fire & Rescue to help with the district’s purchase of two brand new, state-of-the-art ambulances — one already in use and another expected to arrive in September.

The new ambulances cost about $250,000 each and they’ll come equipped with several new features that will reduce back strain for EMTs and also make both patients and EMTs safer and more secure, said paramedic and Battalion Chief Jeremiah Kenfield. Those features include airbags in the back of the ambulance, a restraint system that secures EMTs while allowing them to move around and provide patient care, and, most prominently, a mechanical apparatus that loads the heavy patient cot into and out of the ambulance.

The loading apparatus is a “game-changer” for the EMTs, Kenfield said, because it will save them thousands of cot lifts every year and almost certainly reduce back injuries.

Safer, healthier EMTs are music to the ears of Crook County Fire & Rescue Chief Matt Smith, who started with the district as a volunteer firefighter in 1997. As overseer of the district’s budget, Smith said St. Charles’ donation is an opportunity to take money that was earmarked for an ambulance and spend it elsewhere in a growing district where tax revenues don’t cover the increasing level of service needed.

“We don’t have the ability to snap our fingers and build capacity anymore than anybody else does,” Smith said. “So when unexpected money comes in, we can put it to use elsewhere in the district to increase the capacity of our services and try to keep up with the growth in our community.”

It’s that last word — community — that catches the attention of Crook County Commissioner Jerry Brummer, who has spent the past nine years on the fire district’s board. In a rural area like Prineville, working together is more than just a warm, fuzzy feeling and a positive headline, he said. It’s absolutely necessary.

“Collaboration and partnerships, those are what makes a community,” Brummer said. “We have to work together on this stuff because our duty is to make this the best community we can, and we achieve that by understanding each other’s needs and working hand in hand to figure out how to meet those needs.”

He’s talking about agencies partnering on solutions, but he just as easily could be describing that “one big team” Levesque sees regularly in the Prineville Emergency Department. Whether it’s in a hospital room or the board room, St. Charles and Crook County Fire & Rescue are working together for the people in the region.

“If we didn’t work well as a team,” Levesque said, “there’d be gaps, and it’s the patients who would not get the same level of care they get today.”

For St. Charles, the donation isn’t just about maintaining the current level of care, but planning for the future of the community, too.

“We’re fortunate to enjoy such a positive and productive history of working with Crook County Fire & Rescue,” said Shannon Edgar, chief nursing officer at St. Charles Prineville. “We certainly value their partnership and we look forward to building on it for many years to come.”