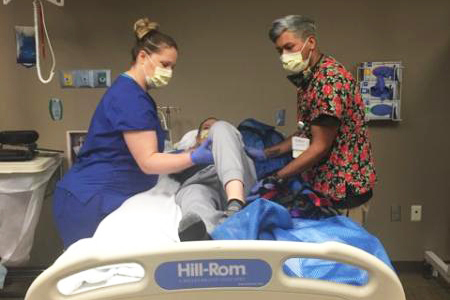 A Path to Patient Care

Last summer, after 14 years as a stay-at-home mom, Amy Stewart started looking for a job that would provide a second income for her family. Her preferred field? Health care.

“It’s something I’ve always wanted to do,” Stewart said. “Caring for people is close to my heart, so I looked at (St. Charles), just hoping to get a foot in the door.”

Less than a year later, Stewart is one of eight St. Charles caregivers who recently completed a new internal training program to become a level-one Certified Nursing Assistant, also known as a CNA 1. In a matter of months, her foot in the door has turned into a full-time job working with patients.

“I’m still pinching myself because I just can’t believe this opportunity came along,” Stewart said. “I can’t wait to go to work because it doesn’t feel like work to me.”

For a variety of reasons, recruiting and retaining CNA 1s has historically been a major challenge for St. Charles. So earlier this year, the health system offered, in simple terms, to pay caregivers to become a CNA. That means current employees were taken out of their roles – in registration and admitting, environmental services and other non-medical units – and placed in a four-week training program paid for by St. Charles. The caregivers were also paid an hourly wage while going through the training, which featured both classroom and hands-on instruction at St. Charles Bend and strictly followed Oregon State Board of Nursing guidelines and processes.

“An in-house CNA training program is something we’ve wanted for a long time because there really is no downside to it,” said Janice Pendroy, the Clinical Practice and Professional Development specialist overseeing the program. “It’s an incredible opportunity for growth and development for our caregivers. It teaches them new skills and gives them a path to advance their careers without having to leave the organization. It’s an investment in our people, and it strengthens our team by keeping proven and experienced employees here.”

Stewart was happy with her initial job at St. Charles on the Central Processing team, which works closely with the Operating Room to prepare and process surgical instruments and carts ahead of surgeries. She absorbed a ton of information as part of that job’s onboarding process and felt proud of her important role in the hospital’s surgical service.

“It’s the most indirect (form of) direct patient care you can have, because the success of the surgeries depends on, yes, the surgeons, but it also requires that the instruments are sterilized and working properly,” she said. “I would’ve stayed there but I just really, really, really wanted to be on the other side of patient care, and then a co-worker (showed me the CNA program) and I thought, ‘Oh no way. This is too good to be true.’”

Sierra Pfingsten felt the same way. She’d worked in Patient Access Admitting at the St. Charles Madras Emergency Department for more than a year when she learned of the CNA program and saw an opportunity to make progress on a long-held goal.

“I’d wanted to get my CNA certification but have been struggling to find extra time to complete the program,” Pfingsten said. “So getting the opportunity to do that while still working was absolutely amazing.”

Pfingsten said she was overwhelmed by the support and encouragement she received from fellow caregivers across the health system. “I’d recommend it to anyone seeking a different career path within St. Charles,” she said.

All eight members of the first CNA trainee cohort were passionate about patient care, dedicated to learning and enthusiastic about the opportunity, Pendroy said. Tara Estes, formerly a Patient Service Representative at the Bend South Immediate Care Clinic, said she “immediately applied” for the program because she had long wanted to be more involved in patient care but had never been able to schedule more schooling. Skye Buck, who was registering patients at the Bend Emergency Department, said she was “so excited” to be a part of the health system’s first CNA program. And Jordan Johnson, a former member of the Environmental Services (EVS) team at St. Charles Madras, commuted more than an hour each way from her home in Warm Springs to Bend every day of the program, in part because she believes it is her gateway to a nursing career.

“I’ve been interested in health care since I was young and I took my EVS job hoping it would lead to something like this,” she said. “I’m going to try to get into the CNA 2 course and then the goal is to go for the nursing program at Central Oregon Community College.”

St. Charles is planning to offer a similar program for level-two CNAs, or CNA 2s, later this year, Pendroy said.

Stewart is interested in future programs, but even if she never pursues them, going through the CNA 1 program has already changed her life in ways she could never have expected, she said.

“Being a stay-at-home mom, your life revolves around your kids – which is such a hard and important job, don’t get me wrong. But this has changed the way they view me. All of a sudden, Mom’s not just a mom. She can help people. She has all this new knowledge. They ask me questions about my work now,” she said. “It’s given me so much more confidence than I had before. It’s like, ‘Yes, I am a productive member of society.’ I’m helping people. I’m making sure people feel cared for. It’s awesome.”