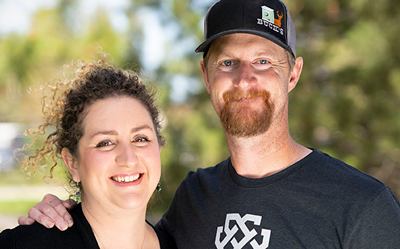 Spotting signs of stroke to save husband

It was an early December morning in 2017, and Brett Kinnard was most of the way to Prineville for work when he realized something didn’t feel right.

And that’s where Brett’s streak of good luck started. Despite an intense headache and blurry vision, he was able to turn around and drive all the way back home. There, his wife Heather was home when she typically wouldn’t have been. She had dropped their children at daycare and stopped back by to grab something on the way to another appointment.

“I heard him come in loudly, stumbling around. I thought, ‘What the heck is this guy doing here?’” said Heather, a registered nurse on St. Charles Bend’s surgical floor. “He was walking around opening cupboards and not saying anything to me. Which is not abnormal for husbands to ignore their wives, right?”

But this was different. Brett was clearly looking for something. When Heather asked him what he needed, he replied, “Pencils.”

She was confused. “Why do you need pencils?” she asked.

That’s when Brett responded with a nonsense string of words that worried both of them.

Heather went into nurse mode. She sat Brett down and did a quick assessment. He seemed a little panicked but otherwise looked fine. She looked for the FAST signs of stroke: F for facial droop (nope), A for arm weakness (nope), S for speech difficulties (yup). She decided it was T -- time to go to the hospital.

“I just had this really bad gut feeling that he was having a stroke,” Heather said. “We got to the emergency room in about five minutes and he walked in just fine, but by the time he was in triage, his face was starting to droop.”

Indeed, Brett had suffered an embolic stroke, which means a blood clot traveled to his brain. He spent three days in the ICU, a couple days in Ortho/Neuro and then four weeks in inpatient rehab, where he entered completely paralyzed on his right side and mostly unable to speak.

“The only words he could say reliably,” Heather says with a laugh, “were curse words.”

Thanks to his strong work ethic and St. Charles’ excellent rehab program, Brett left inpatient rehab walking with a cane.

“Our experience at St. Charles, from the second I walked into the ER till now through the ICU through inpatient rehab and then outpatient rehab has been amazing,” Heather said. “There was never a time when I felt like we could have been in a better place for him to get better.”

By March of 2018, Brett was snowboarding with the help of the folks at Oregon Adaptive Sports. Since then, he has biked and climbed at the rock-climbing gym, and this winter he’s snowboarding with no extra help or gear. In February, Heather came home to find him on the roof of their home, removing ice dams.

Over the past 18 months, Heather has become a sort of amateur speech therapist, and last winter, she saw Brett’s speech progress starting to plateau. So she started researching intensive speech therapy options and found The Aphasia Center, a private treatment center in St. Petersburg, Florida. From mid-March to mid-April, Brett stayed at the center and worked with a therapist for five-to-six-hours-a-day, five-days-a-week. When he wasn’t working on his speech, he was outside soaking up the sunshine and warm weather.

“He has been really motivated, so I wanted to give him something to look forward to, but also give him a challenge to get better,” Heather said.

As always, Brett was up for that challenge.

Brett has been back for a month now, and Heather called the progress he made there “remarkable,” especially given that he’s now 18 months post-stroke. These days, their kids understand Brett better than anyone, she said.

“They just adapt so quickly. They finish his sentences for him. They know what he wants before he knows what he wants,” she said. “They notice if he says something he’s never said before. They’re his little cheerleaders.”

The kids are just part of Brett’s support system. His parents spent several months in Bend last year to help him and Heather. His twin brother Todd comes to visit and hang out and have fun. A whole bunch of people contributed to a GoFundMe fundraiser to help the Kinnard’s pay for Brett’s trip to The Aphasia Center.

“A lot of people like Brett,” Heather says, her voice quivering ever so slightly. “And I feel like he’s always felt like he has someone to get better for, which is really important. It wasn’t an option to just sit around and not get better.”

Brett agrees. And when he does so, his message and his motivation comes through crystal clear.