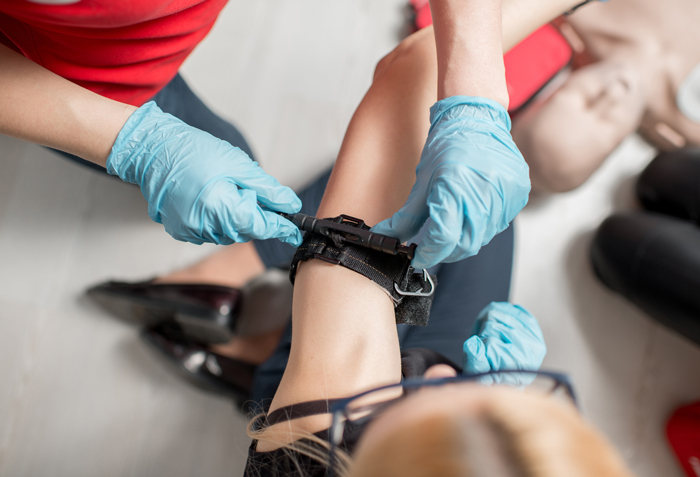 Teaching people to Stop the Bleed

St. Charles Health System’s Trauma Services team is taking life-saving Stop the Bleed training and tourniquet kits to local schools and businesses this fall, thanks in part to money donated at the St. Charles Foundation’s Saints Gala fundraiser in 2019.

That year, the event raised money to benefit the trauma program, which provides injury prevention education and help for those who suffer traumatic injuries in Central Oregon. Donors at the event gave around $250,000 to the cause.

Trauma Services has spent some of that money on things like upgrading the Bend hospital’s trauma rooms and a new ultrasound machine. Now, the team is ready to relaunch Stop the Bleed training after more than two years off because of the COVID-19 pandemic.

“With a focus on injury prevention outreach, we are using some of the money we have left to purchase Stop the Bleed kits and get them out into the community,” said Jeremy Buller, trauma program coordinator for St. Charles.

Stop the Bleed trains, equips and empowers people to help others who are injured following a traumatic event. It is part of a national campaign organized by the U.S. Department of Homeland Security.

St. Charles regularly receives requests for the training from local individuals and organizations such as Bend-LaPine Schools and the Bend Chamber of Commerce, Buller said. Those requests have increased since the Aug. 28 Safeway shooting on the east side of Bend, he said.

Shootings can cause traumatic injuries, of course, but the majority of traumas in Central Oregon happen as the result of car crashes, falls off bikes and e-bikes, camping accidents and other everyday occurrences, Buller said.

“Hemorrhage is the number one leading cause of preventable death in trauma patients,” he said. “So the things we see on TV aren’t necessarily the reason we do this training. It’s more likely that you’re going to run across a need for this while you’re running an errand or you’re out on the trails.”

Training sessions are currently planned in November and December at Mountain View and Bend Senior high schools and the Bend Chamber, with more to be scheduled. Soon, Buller hopes to relaunch training that’s open to the public, and Stop the Bleed is now being taught as part of Trauma Services’ standard CPR education.

The department is also using the Saints Gala money to buy Stop the Bleed kits, which contain a tourniquet, gauze, gloves, scissors, a pressure bandage and more. They give these kits away for free as part of the training.

“The goal is to have these kits readily available in the event you run across someone that is experiencing life-threatening bleeding,” he said, “and to train as many people as possible on how to use them.”