Visitors will only be allowed if they provide acceptable proof that they are fully vaccinated against COVID-19, or meet one of the few allowable exceptions. This policy applies to visitors only. Patients should seek needed care and will be treated regardless of vaccination status. 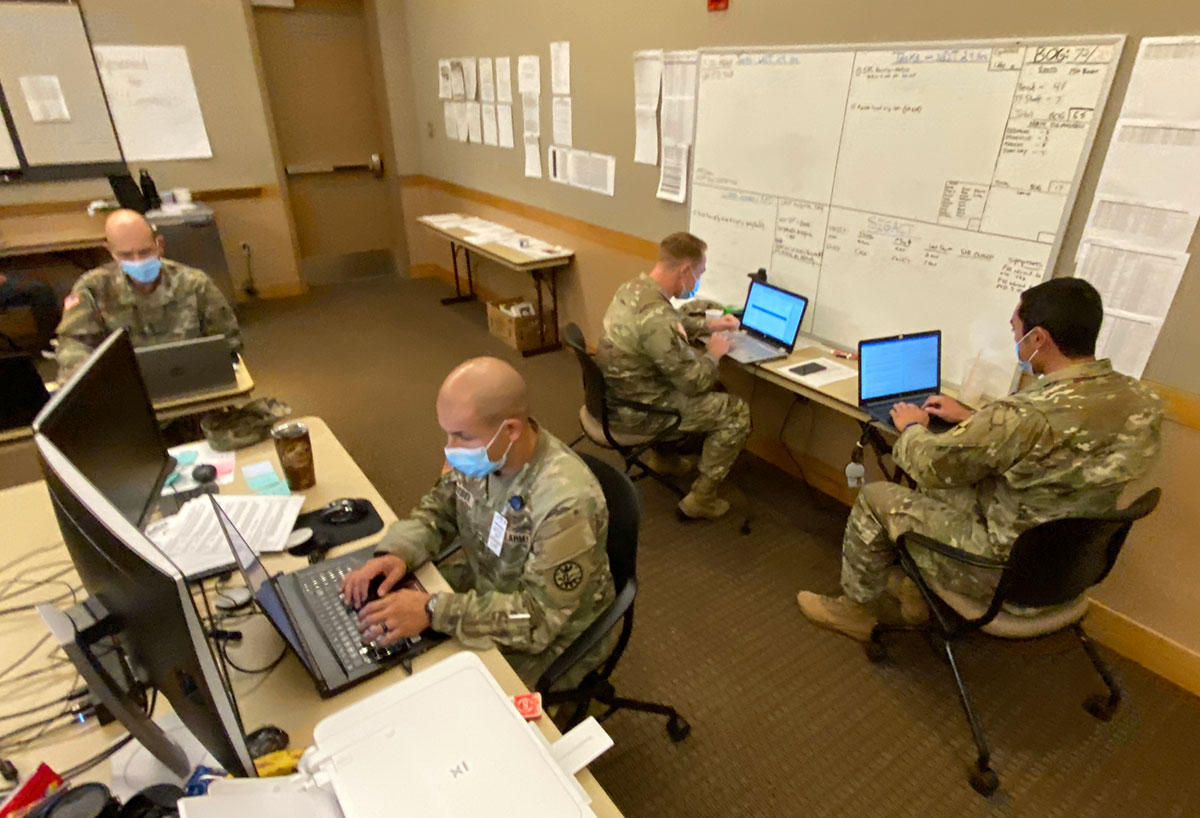 In mid-August, Sgt. Jerimiah Mangum of the Oregon National Guard traveled to Bend from his home in Newport. He had no idea how he’d be spending his time in Central Oregon, nor did he know how long he’d stay.

“When we come into a situation like this, we’re just here to help,” he said. “So we try to arrive with an open mind.”

Mangum’s unit, the 116th Cavalry Brigade, had been deployed by Gov. Kate Brown to help rural hospitals with the worst surge of the COVID-19 pandemic. On Aug. 19, he arrived at St. Charles Health System’s Bend hospital for his assignment: to work as a screener at one of the facility’s entrances.

He’s done that almost every day since – nearly three months of small talk, screening questions, hand sanitizer and infrared thermometers, plus people who are appreciative of his service and people angry about the hospital’s requirements for entry. (More of the former than the latter, Mangum says.)

He enjoyed the social aspect of door screening, he said. But he especially enjoyed working at the entrance near the St. Charles Cancer Center, where he built a rapport with people who visited the center frequently.

“We saw cancer patients who would come in every day and after a while, you form a relationship with these folks. You get to know them and see them progress through their treatment,” he said. “Just in the short time I’ve been here, I’ve seen people finish their treatment, and that’s pretty cool, to share that experience with them.”

Mangum is just one of about 150 Guard members who’ve worked at the four St. Charles hospitals over the past three months. The vast majority live outside Central Oregon and have been living in local hotels while they carry out their mission: to do jobs that St. Charles needs done and that allow the health system’s clinical caregivers to focus on caring for patients.

Besides providing screening at entrances, soldiers have cleaned rooms and work areas, delivered food and transported patients, said Lt. Col. Kyle French of the Oregon Air National Guard, who leads the team that oversees the deployment from a logistical standpoint. French, who works for a tech company and lives about two miles from St. Charles Bend, said the Guard has worked closely with St. Charles management to put troops into positions where they can succeed. Seeing them succeed has been a highlight of the assignment, French said.

“These are good people who do what they’re asked to do and they do it well,” he said. “I’m retiring soon, so this is kind of one last big job for me to do, and it’s been really rewarding knowing that we’re doing good work and we’re helping the community.”

As it is for French, the deployment comes with some personal fulfillment for Staff Sgt. Daniel Egbert, who lives in Salem but was born in Redmond and grew up in La Pine. His stepmother retired from St. Charles after her nursing career, he said, and his brother’s girlfriend works at St. Charles Prineville. A member of the 641st Aviation Unit, Egbert has been working for the health system’s Environmental Services unit, which means he has cleaned rooms and nurses’ work stations “so they’re able to do their job the best they can,” he said.

Egbert called his time at St. Charles “a blast,” thanks largely to the relationships he has built with his coworkers and his attitude and approach to the job, which have been shaped by 22 years in the Guard.

“And it’s special being back here where I grew up helping my community,” he continued. “We’re here to support the community in any way we can, and when you can tell you’re doing that, it just makes it that much better.”

On Monday, Nov. 15, the number of deployed Guard members across St. Charles Health System will drop from 72 to fewer than 40. Those soldiers, who have worked side-by-side with St. Charles caregivers since August, will remain on assignment across the health system for a few more weeks. Here is a collection of comments from St. Charles leaders about the troops and their work:

“Nicholas has supported us at our COVID drive-up since the National Guard was deployed to help us. I would like to acknowledge how amazing he is to work with. He is always positive, in every interaction – even in our extreme temperatures, high (>100 degrees F) and low (17 degrees F). He has helped our seasoned phlebotomist develop standard verbiage to successfully collect children with a positive outcome. I have received many compliments from parents stating their children had such a great experience. He calls himself the Booger Hunter and the kids love it!

He is excellent at de-escalating situations, professional, very respectful, supportive and my go-to person that I can count on in any condition or situation. He will be very much missed!”

“Redmond Inpatient Services would like to recognize Tran and Grace for their recent service to the Redmond hospital. Tran is the epitome of professionalism and positivity. He completed every task with enthusiasm and regularly checked in with leadership throughout his shift when there was downtime looking for more ways he could support. He is accountable and diligent, even calling the manager at home one Sunday to make sure we knew he had a mandatory meeting to attend on Monday and wouldn’t be on site. He was so wonderful with our sitter patients, often sitting inside the room having meaningful interactions. He will be sorely missed! Grace has also quickly become a valued member of our team. She eagerly volunteers to take assignments all throughout the hospital, including challenging patients in the ED. She stays on top of call lights and is a great resource to our team. We are excited that she will remain with us a bit longer!”

“I just wanted to tell you about an awesome worker from the National Guard named John. He caught on to the transport job very quickly and has been so great at it. We had an elderly patient with scabies and lice and he even volunteered to get her while being very caring towards her.”

“Chris worked this past weekend sitting with a confused and impulsive dementia patient. He was very compassionate and had a calming effect with this patient. When he was not needed at the bedside, he graciously answered the call lights which was very helpful. In addition, Chris has been asked to move from the Emergency Department to Food Services on several occasions and each time he is willing and always with a smile. Chris’s attitude and kind demeanor is always so appreciated.”

“We have had the pleasure of having Josh work with our team on the Surgical unit. He has been helpful in every way possible. Josh is flexible, hardworking, a team player and open to new and ever-changing tasks. He has been a calming presence for patients at times when they are agitated. He does N95 mask fit testing, stocking supplies, moving equipment and PPE, giving rest breaks to sitters and even being the ‘sitter’ when we did not have adequate staffing. Josh does all of this and more with a pleasant attitude, determined to offer assistance wherever needed. He has been very valuable to our unit. It is an honor to have him here!”

John, Tyler and Cole have supported us at our COVID drive-up since the National Guard was deployed to help us. I would like to acknowledge John’s hard work and dedication. He was always dependable, honorable and a great person! I also appreciate all of Tyler’s work and support he has given us. He was always kind to everyone, coworkers and patients alike! Finally, I would like to acknowledge Cole’s unwavering support of our operation. He is a great leader, he is respectful and he has great follow-through. I knew I could always count on him, even in the extreme temperatures we experienced during his time here. All three will be missed!