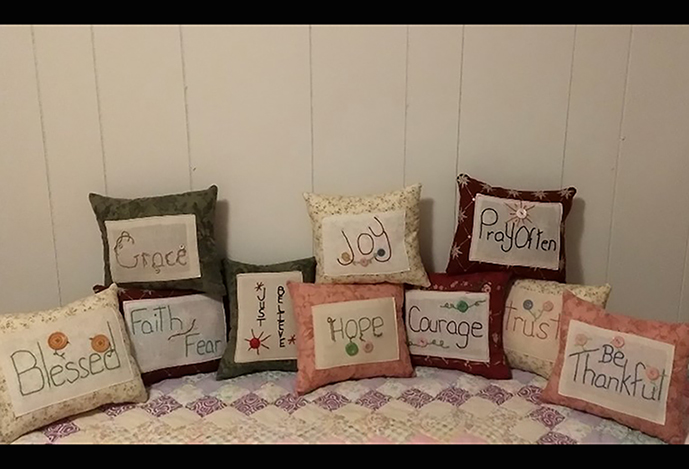 "There wasn't a dry eye in the building"

Victoria Stephens was still recovering from surgery when she knew she wanted to find a way to give back to those who had helped her.

Her first goal was to thank the medical team in charge of her ovarian cancer treatment, led by Dr. Emily Berry at the St. Charles Cancer Center.

Stephens was immediately impressed with Dr. Berry’s manner and level of care when she sat down with her for the first time after her diagnosis.

“She told me, ‘My team and I are going to be beside you,’” Stephens said. “‘We’ll be at the end of the phone. We’re going to have open doors. And we’re going to help you get through this.’”

She was also thankful for the employees of the Cancer Center, where a simple smile could make a difference in someone’s difficult day.

“From the gal that checks you in early in the morning to the person who checks you out at night (and) the people who help you in between – the people in the infusion room – I would like to thank each and every one of them,” she said. “They are absolutely beautiful people.”

Stephens’ second goal was to give something tangible to the people who had been such a source of encouragement during her cancer journey – namely, the online community from all over the country who participated in live auctions through her family's Redmond antique store. When those folks learned of her diagnosis, they flooded her with support and kindness.

“Their prayers held me up a lot during this time,” she recalled. “It was very, very comforting to know that these people, most of whom I didn’t even know or see, reached out and held my hand, prayed for me, asked how I’m doing.” 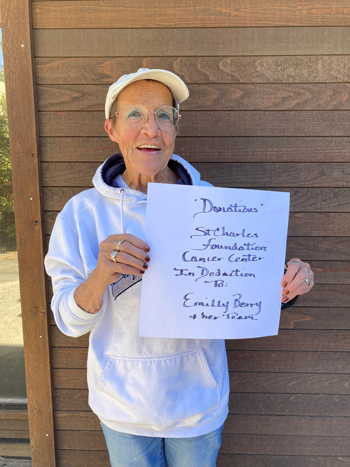 Stephens settled on embroidering handmade pillows with the inspirational words and phrases that had always provided her strength and comfort, such as Joy, Hope, Be Thankful and Faith Over Fear. And then there was Courage, which was specifically inspired by the unexpected passing of her brother in the midst of her chemotherapy treatment. Her hope was that the pillows could give people something to hold on to if they needed encouragement, or pass on to someone going through a hard time.

With a little decorating help from her granddaughter, Stephens completed 11 pillows throughout the rest of her chemo treatment before she was declared cancer free in May of 2022.  The plan was to sell the pillows through live auctions, with 100% of the proceeds going to the St. Charles Foundation in dedication to Dr. Berry and her team.

The online auction took place on her birthday, and she hoped to get around $10 for each pillow. With her family and friends beside her, Stephens watched in shock as bidding wars erupted over each one, with some selling for as much as $300 to $600 each to the same members of her online community who had supported her through her health issues. By the end of the auction Stephens had raised $3,467 for the Cancer Center.

“I was so overwhelmed,” she said. “There wasn’t a dry eye in the building.”

Beyond donating to the center, Stephens hopes to spread awareness about ovarian cancer, which is one of the hardest cancers to detect due to its lack of symptoms in the early stages. Her own symptoms were initially misdiagnosed as a liver condition, and several months went by before a specialist at OHSU discovered that it was, in fact, Stage lll ovarian cancer.

She encourages women to advocate for themselves if something doesn’t feel right: “Women, if your stomach swells, if you’re feeling punky, please go get checked.”

For more information on the signs and symptoms of ovarian cancer and to learn if you might be at risk, visit www.ovarian.org.