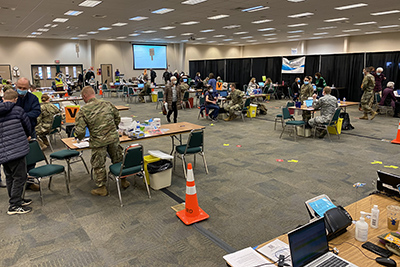 Rachel North was on the other side of the parking lot lane at the Deschutes County Fair & Expo Center when an elderly woman started shouting questions at her.

Her tone was either impatient and mean or simply firm and direct, probably depending on the disposition of the person to whom it was directed. In North, she had found the perfect recipient.

“We’ve got wheelchairs,” North said gently, with a big smile on her face. “You get back in the car and wait, and I’ll make sure we get a wheelchair out here to you.”

As she pulled away from the woman’s car, North laughed good-naturedly at the exchange. “I work for the Transportation Security Administration (in the Redmond Airport), and that can be a little rough, you know?” she said. “I’ve been seasoned. I’ve got days and days of stories. This is a piece of cake for me.”

It was a Saturday morning at the fairgrounds, and hundreds of people age 75 and older were arriving to receive their first dose of the COVID-19 vaccine. The weather was cold and unusually blustery, and patchy snow and ice on the ground made access to the large-scale vaccine site inside — operated by St. Charles and Deschutes County, with help from the Oregon National Guard — particularly tricky.

That’s where North and her fellow golf-cart drivers came in. Their mission was simple: Crisscross the parking lot looking for cars with their hazard lights blinking. That was a sign that someone inside (or standing nearby) needed assistance.

“Sometimes,” she said, “they might be waving their arms or honking their horn.”

North is just one of “several hundred” volunteers who have helped make the fairgrounds vaccination site a success over the past few weeks, said Trevor Janeck, a talent acquisition manager at St. Charles who is helping to oversee the volunteer effort. In addition to ferrying people from the parking lot to the door, volunteers are greeting people as they enter, registering patients and helping guide them through the process, among other jobs.

Their efforts have not only been a vital part of the operation so far, they’ve been inspiring, Janeck said.

“The response from the community on this has been incredible,” he said. “Everyone who has volunteered has been so kind and so willing to do whatever it takes to make this place work as smoothly and efficiently as possible. And almost every one of them says more or less the same thing: ‘It’s just so important that we get this vaccine to people, and I want to help however I can.’”

More than 1,000 people have signed up to volunteer at the St. Charles website and at Deschutes County’s website, which is more than the fairgrounds site can even use.

“We’ve had to turn people away,” Janeck said. “It’s just been overwhelming.”

One of those volunteers is Teague Hatfield, owner of the Birkenstock store in downtown Bend. On a recent weekend, he was stationed just outside the clinic, greeting everyone who walked by and funneling people toward the check-in area. He said he signed up after a co-worker volunteered and encouraged him to do so.

“I came out a couple days ago and, honestly, it was just a ball,” he said. “People were in good spirits and it felt like it was helpful, so I came back to do it again.”

Hatfield said he was impressed by the operation and planned to take a shift per week as long as volunteers are needed.

“We’ve all been sitting around waiting for something to happen, so this is exciting that it is happening,” he said. “And being out here, like 99.9% of the people have been friendly and appreciative and the whole bit. This is what I’ve done my whole life, just talked to people.”

On the other side of the clinic, Wendy Worstell stood near in the hallway between the vaccination area and the recovery room, where patients are asked to wait for 15 minutes to make sure they don’t have a reaction. Her job? To make sure no one wandered through without getting their shot.

Worstell is a retired registered nurse with a daughter who teaches for Bend-La Pine Schools. She is currently splitting time between Central Oregon and Eugene and said she came to the fairgrounds to do whatever she could to help.

“I just think it’s hugely important that when we have a pandemic like this, that whoever can step up steps up and helps get the vaccines out there,” she said. “This has been wonderful. I’m so impressed.”

Back out in the parking lot, North dropped off one woman at the front door and started backing her golf cart up to make another run into the sea of blinking hazard lights. With her knit hat pulled down to her eyebrows and her mask up over her nose, she looked like she could’ve been warmer at home. But that really wasn’t an option, she said.

“I volunteer for the Assistance League of Bend. I volunteer for the Nature Center in Sunriver. It’s what you do when you live here,” she said. “I just had the day off and I could sit inside and watch Netflix or I could come out and do a nice thing for people.”