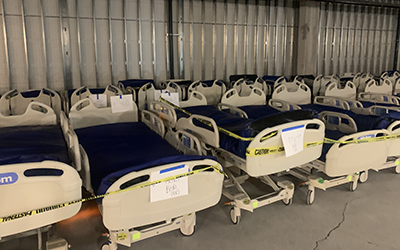 Earlier this year, in anticipation of COVID-19’s arrival to Central Oregon, St. Charles Health System set up a number of teams to prepare and support hospital operations for the possibility of a surge of sick patients at St. Charles Bend.

Under normal circumstances, the Bend hospital has 209 beds available for patient care, including 24 in the Intensive Care Unit, home to the most seriously ill. At the time, COVID-19 cases were spiking in Seattle and New York City, overwhelming hospitals in those areas.

So St. Charles' Incident Command team – a management structure used in times of crisis – tasked a group of caregivers with developing a “surge plan” to detail how the hospital could expand its patient capacity within the existing campus.

It was a monumental and multi-faceted effort that required collaboration and cooperation across the entire organization, said Jenn Clark, a manager on the health system's Value Improvement Practice team who was heavily involved in the work.

“The initial stage of the process was to assess our current resources so that we would be able to maximize our abilities in space, equipment, supplies, people and technology,” Clark said. “That assessment gave us a framework to design a surge plan in tiers, which would allow us to maintain a controlled execution of services.”

There are six tiers, from Tier 1 (normal operations) up to Tier 6, which projects capacity at 751 beds. More recently, better data and predictive analysis were used to create a special Tier 1.5, which would increase capacity to 283 beds (complete with privacy and infection control measures) and would be “easier” to launch if needed, Clark said.

The team increased the hospital’s capacity by doubling beds in rooms that are big enough to do so and combing the facility for areas where patients are not typically cared for, but they could be if needed.

“We looked at non-traditional care spaces such as family waiting rooms, conference rooms and office space and fabricated plans to transform them into viable places for patient care,” Clark said. “Our regulatory team helped draft these plans to propose for certification from Oregon Health Authority, and our workflows for patient care were redesigned to ensure functionality in this new environment.”

At the same time, Tony Arnold, manager of purchasing and strategic sourcing on St. Charles’ Supply Chain team, was working to secure the supplies needed to execute the surge plans, Clark said. When certain items became scarce because of competition, the team developed backup plans. All necessary resources are now on hand and triaged to allow the health system to serve a record number of patients.

“Some of the surge work you cannot see, such as the framework our IT team built, which allows us to leverage existing technology for patient safety measures,” said Julie Ostrom, senior director of perioperative and cardiovascular services, who was also involved in the planning. “The surge plans also outline when we would pull on state and national agencies for support if our system were to become overwhelmed.”

Ultimately, the surge planning process included all the key components that enable St. Charles to deliver safe and effective care, including food services and linens, demands on the health system’s laboratory and pharmacy, and, of course, staffing. Clark gave a special shout-out to Jessica Truson, a manager in the Information Technology department, for organizing the work to ensure all its moving parts worked together.

“The plan outlines specifics for each St. Charles hospital campus that will ease collaboration and benefit each of the communities we serve,” Clark said. “Education and cross-training were developed and executed to allow for blended nursing care models to support a potential surge.”

She continued: “We’re ready to turn this on if we need to.”

Even if they’re never needed, however, developing the surge plans was a “valuable exercise” for the organization, Clark said, and work to archive them for future reference is almost done.

“Through all this, I wanted to make sure our patients would feel like they were getting the same high-quality service and care that they would get on a normal day at St. Charles,” she said. “Our passion is our communities’ health, and it was inspiring to see our team come together to serve them in the face of an emergency.”