Effective Oct. 18, visitors will only be allowed if they provide acceptable proof that they are fully vaccinated against COVID-19, or meet one of the few allowable exceptions. This policy applies to visitors only. Patients should seek needed care and will be treated regardless of vaccination status. 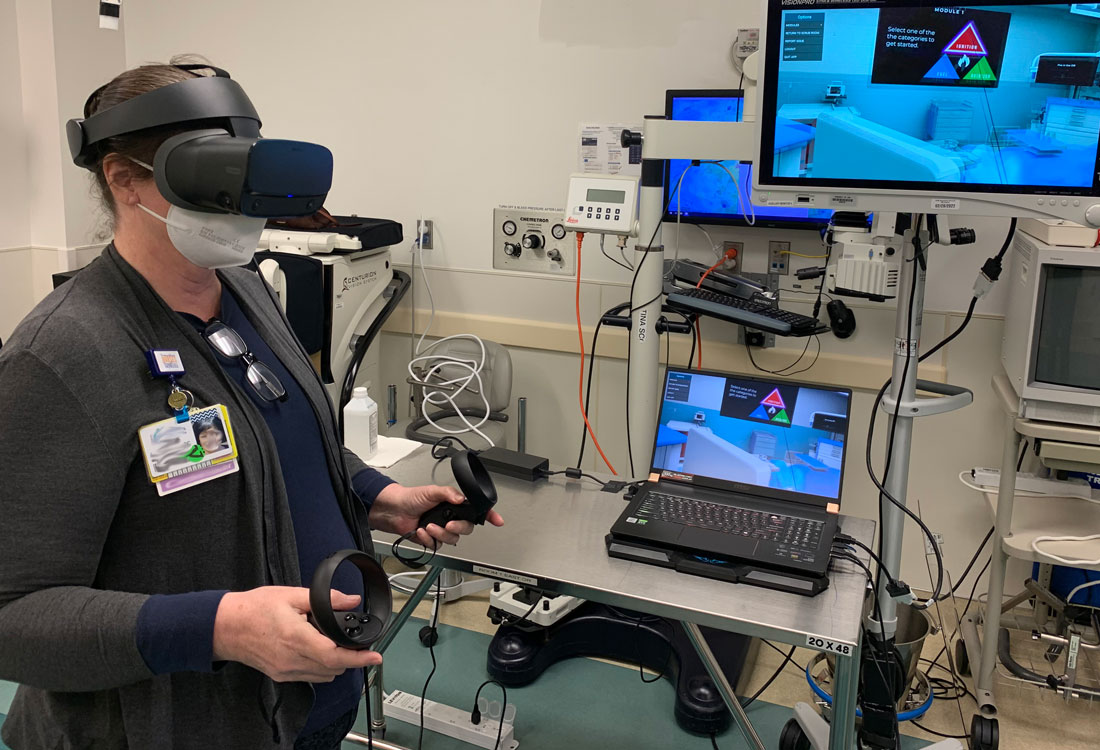 In a world of their own

In a world of their own: Caregivers use virtual reality technology to train for medical emergencies

Janice Schmidt is in another world.

The St. Charles Bend operating room she’s in isn’t prepped for surgery—equipment is shoved to the side and sitting idle—and no one else is there.

But in her virtual reality, the operating room is hopping as a team of doctors and nurses quickly react to what could become a catastrophic disaster.

With a headset strapped to her face and paddles secured to each of her hands, the clinical practice education coordinator is racing to extinguish a fire that erupted when a laser (used to repair the trachea of a patient) ignited a dangerously high level of oxygen. Schmidt has mere seconds in this timed scenario to reach for a bowl of water, extinguish the burgeoning blaze and peel back the patient’s surgical drape before it’s engulfed in flames.

“We don’t want to just read a book,” she said. “We want to see it, do it, feel it. Virtual reality is a game-changer for reduction in fire risk.”

That’s why St. Charles Health System is joining the ranks of other West Coast health care providers like Stanford Health and UCLA Health that are using virtual technology to improve the quality of the clinical training they provide. Since January, more than 100 St. Charles doctors, nurses and technicians have completed their annual Joint Commission-required education on fire prevention via Health Scholar’s Fire in the OR virtual reality simulation.

In operating rooms, fire is an ever-present danger, said Sherie Ponting, interim perioperative educator. That’s because the three components of fire, known as the “fire triad,” are present in nearly all surgical procedures: an oxidizer, like oxygen or nitrous oxide; an ignition source such as a laser or electrocauterizing tool, and fuel, which can be anything from surgical drapes to gauze.

Through virtual reality training, Ponting said caregivers realize just how fast a fire can happen and how quickly they must respond.

Operating room fires are rare events—about 550 to 650 are reported each year in the United States—but surgical teams must be ready to quickly communicate and react to minimize harm to patients and themselves.

An operating room fire can be a “horrific error,” Ponting said. “A patient’s future care and ability to survive it is based on how fast you can react.”

While virtual reality is a cost-effective way to offer training, it’s also highly effective. Learners who use virtual reality fire simulation training performed 250% better than those who only had traditional didactic teaching methods, according to research cited by Health Scholars.

“It was awesome,” one St. Charles caregiver wrote in their feedback form after taking the Fire in the OR training. Another offered, “I truly felt stressed and recognize how quickly a fire can get out of control.”

Schmidt and Ponting said the response from caregivers has been so overwhelmingly positive that the health system plans to soon offer additional virtual reality simulations for other kinds of scenarios such as when a patient experiences malignant hyperthermia (a kind of severe reaction to drugs used for anesthesia) or precipitous delivery (the rapid delivery of a baby).

“If I save one life, one patient from being harmed, that’s enough,” Schmidt said.