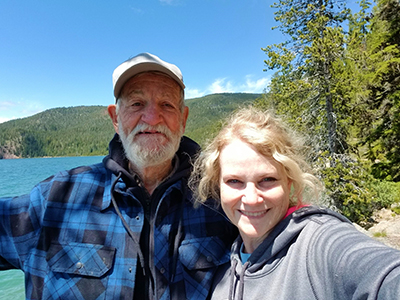 'She was awesome on a day when I needed awesome'

Shari Petersen had just been in Central Oregon visiting her father, Jerry, when she received a worrisome call from her stepmother.

“She said she didn’t know what was wrong with him, but that she was taking my dad to the ER,” Petersen said in a telephone interview from her home in California. “I just thought to myself, ‘I was just up there. Why couldn’t this have happened when I was up there?’”

But it didn’t, which means Petersen was in a position that many people find themselves in every day: Far away from a loved one dealing with a health scare, desperate for information and unsure how to get it.

“I didn’t know if he was going to survive. I didn’t know what was wrong with him. It’s too far to start heading that way, even if I could fly,” she said. “I couldn’t reach my stepmom and I couldn’t get anything from the ER. I just felt so helpless.”

So Petersen did the only thing she could think to do: She called St. Charles in hopes of filling out and filing forms that would allow caregivers to provide updates to her and her siblings.

“She was in tears by the time she got to me, and I know that feeling – that feeling of helplessness. I was out of town one time when my father had a heart attack. I was unable to get information and it was extremely hard,” said Hasbun, who has worked for St. Charles for six years.

“I’m an empathetic person and I hate to hear people struggling,” she continued. “I could tell right away that she needed me that day.”

Petersen expected a standard answer: “Go to our website. Print out this form. Fill it out and send it in.”

What she got instead still chokes her up.

“She volunteered to print the forms, fill them out for me and then go over to the ER on her lunch break. It makes me want to cry just thinking about it,” Petersen said. “So I was already overwhelmed by her kindness, and then she called me and said, ‘Hey, I know your mom has been in the ER for a long time. Do you think she’d like a sandwich and a bottle of water?’ And jeez, I just about fell on the floor.”

Says Hasbun: “I was getting myself lunch, so I thought, ‘Why not grab her lunch, too?’ There’s no food down there except for a vending machine.”

That sums up Hasbun’s approach to not only this particular interaction, but also her job and her department of 25 caregivers who talk to patients and families all day every day.

“That’s just my personality. I don’t do it to get kudos. I just believe in treating people with compassion,” she said. “When we train our staff here at One Call, I like to say, ‘Pretend it’s your mom or your dad or your grandparent or your kid on the phone. How would you want them to be treated?”

Ultimately, Petersen’s stepmom got her sandwich, and Petersen got her forms filled out and filed. Her dad is doing “much better,” she said, and she sent flowers and balloons to Hasbun to thank her for her efforts. She also hopes to meet up with her next time she’s in Bend.

“Even though I was a total stranger and she had never spoken to me before, she went 100 miles above and beyond,” Petersen said. “She was awesome on a day when I needed awesome.”